The Five Stages of Organization Maturity

The five stages of organization evolution are defined by key characteristics, operating agenda, economics, and key concerns as summarized below. A new organization starts out as an idea, or Concept. A bona fide Concept requires at least:

It is hard to get a good idea, enough money, and a strong team all in the same place, and at the right time, for success. Many search their entire careers for the right combination. Those who are successful once hardly ever are able to do it again. Despite the long odds, a million or so new for-profit, non-profit, and internal ventures are conceived each year in the U.S..

Those who cover the costs of getting started generally own the venture. Funds to get out of the gate are often provided by the one who came up with the idea along with “family, friends, and fools (which some say are, by definition, all fools!)”.

Which of the three (concept, idea, team) is most important depends on what you have and what you are missing. For example

Most new ventures are launched by those with little, or no, leadership, management, or operations experience. According to the Small Business Administration “two-thirds of new employer establishments survive two years, and 44 percent survive four years“. See also this report from Hustle Life on Startup Business Failure Rates.

Nonetheless, founders with determination, energy, intelligence, wits, a sense of humor, and with a thirst to learn both from their mistakes and from others with experience, can do well.

Objectives in the Concept Stage :

It is most efficient (i.e., it costs less, takes less time, and is easier) to uncover and sort out challenges by thinking through and articulating a concept rather than through trial and error. It is also easier, and more likely to be unambiguous, to share a well-thought-out Concept with those who eventually join, invest in, or advise the organization.

Clearly articulating which of the above, including combinations, is the driving force provides a guiding hand to what lies ahead. The Startup likely has a few customer and up to a few dozen employees who are gaining confidence that what they do fills a genuine market need where no other player dominates. On the other hand, survival is far from guaranteed.

The Startup is likely to be self-funded, or a few investors may have kicked in less than a million dollars for a small equity stake. A fully-funded Startup might have one serious institutional investor, with more waiting in the wings, who has invested $1-2M in return for up to 40% of the equity. The organization uses raised funds to cover the cost of developing its offerings and its sales, delivery, and operating methods.

The principal issues for Startup organizations revolve around focus and managing scarce resources. For example, Startups often struggle to deploy scarce competent personnel to both successfully deliver on commitments to current customers and to find the next customer. The few team members who “know what they are doing” are spread precariously thin across sales and delivery activities and there never seems to be time or energy left at the end of each day to even think about setting up for the long-term.

As hectic as it is to get through the day serving customers and prospects, there may simultaneously also be a never-ending race-against-time to secure the financial resources required to continue operating. Cash to a Startup is like blood to a living being, or gas to a car, in that everything stops when it runs out. Until the organization starts making its own, there is an ever-present need to find more funds (fuel) from the outside.

While the above is all-consuming enough, Startup leaders often cannot resist the temptation to allow their attention to wander in order to explore nearby or new opportunities that could be the “big win” just around the corner. Launching such initiatives is tantamount to launching additional businesses.

A better strategy is to not “chase rainbows” and, instead, tighten focus further on the business that offers the best prospects for the most growth in the shortest amount of time so that scarce resources can be optimally deployed to efficiently drive the most value. It is hard enough to run one business well … launching others, while it may seem counter-intuitive at first, reduces the odds of any success.

Whether, and how, the organization evolves to systematically address these challenges will determine its attractiveness to current and future employees, customers and prospects, partners, suppliers, lenders, investors, and suitors.

To stabilize operations sufficient to attract customers, employees, board members, financing, and partners, leaders develop a strategic plan and an operating plan that includes:

Leadership’s mandate is to execute its strategy and operating plan while it tracks and reports on progress to establish a pattern of successful performance against the plan to achieve a targeted result in a time frame. Stakeholders (owners, founders, management, board, employees) are anxious for the Startup to achieve results that make it clear the organization is on a solid and predictable track to fulfill its mission to generate returns on financial and personal investments.

The organization’s culture, or way of working, takes shape and hardens as do its core values (i.e., its beliefs that shape behavior). 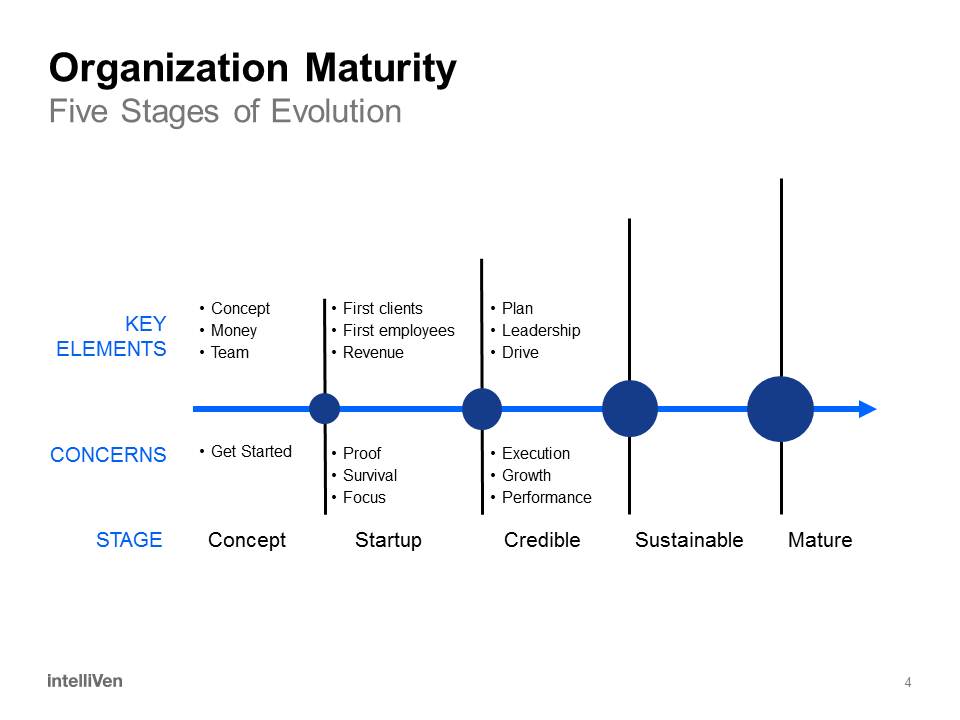 If a Startup is about making pizza, a Credible organization is about building a pizza-making business (see e-Myth Revisited by Gerber).  The agenda moves from getting things done to building systems that get things done.

For example, the odds of long-term growth and profitability increase the closer the organization holds to a proven business model; such as one of the following five:

and how well it executes its core delivery, sales, and capacity development (or DO, SELL, GROW) in the face of increasing scale and complexity.

It is critical to determine the primary source of revenue around which to increase the scale of operations. While it may be possible to build multiple revenue sources, it is a hard enough to do well with just one. It is best to scale multiple sources only after at least one is on a solid track for success.

To be Credible, an organization needs a financial plan and an operating plan with key players in place who are clear about what the organization is counting on from each and a track record of consistently achieving planned performance. The key players responsible for developing and delivering on the plan must also be driven to achieve their part of the plan and assured by an incentive program that rewards success for so doing. If a business does a few things right in its early stages of evolution, it can markedly improve the odds of sustaining accelerated growth and outstanding performance in future stages. Conversely, it is very difficult for an organization to make critical adjustments to its operating characteristics once it has achieved scale and maturity.  Designing the organization well in the Startup stage improves attractiveness to all stakeholders.

A key concern of organizations that make it to the Sustainable stage is to create liquidity for those who have helped get it there. Key concerns of a mature venture are:

Successful organizations mature operations in sync with their stage of maturity and then get ready for the next. Manage to Lead: Seven Truths to Help You Change the World is the management team’s guide to maturing operations in an orderly and systematic manner.

Each truth drives a continuum of actions. While the truths are disarmingly simple, the actions they drive are anything but easy to implement. The text is complemented by an online Toolbox with templates, instructions, and examples that make doable what is most important to get right next.

Strategic Executive Team Development Program to help top teams align their skills to succeed at their organization’s stage of evolution and to prepare for the next.

Annual Executive Team Strategy and Planning Offsite work plan to help a top team navigate from one stage of venture maturity to the next.

Podcast walkthrough of maturity stage characteristics, what is needed from leaders at each stage, and how to get started on the path to operating excellence: